The Co-exploration of Consciousness by J. Krishnamurti and David Bohm

The co-exploration of consciousness by the unique spiritual figure, J. Krishnamurti (JK) and world-renowned Theoretical Physicist David Bohm (DB) took place in a series of more than 30 investigative dialogues, during which they looked into the nature of their own conciousnesses. The dialogues occurred over a period of two decades—from 1962 to 1983. Their initial perspectives/approaches undoubtedly began from opposite ends of the intellectual spectrum. These ends can perhaps best be described respectively, as spiritual and scientific in origin. Their point of convergence was the inextricable relationship of “the observer and observed”—a core principal in quantum physics and, at the same time, a perceptual faculty that JK was apparently born with.

They looked for, and ultimately found a way to synthesize their approaches; synthesis being, by definition, the combining of separate and even opposite elements or substances to form a coherent whole. For example, The Taoist yin-yang symbol 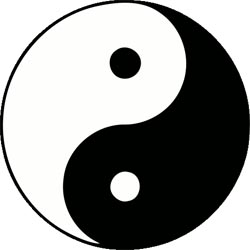 expresses that synthesis graphically. However to do that with words and concepts is quite a bit different, since, as JK often pointed out, “the word is not the thing” it attempts to describe. For example, the word “door” may infer an infinite number of openings through which one may walk. It can even be a metaphor. But in quantum physics, the word and its much more precise conceptual counterparts, number and the mathematical equation, are everything. And therein lay the challenge the two men faced.

The synthesis began with the step by step mutually identified and acknowledged limitations of the intellect—also known as “knowledge”—which is an accumulation of all our perceived experiences and our responses to those experiences, real or imagined. This aggregate is stored in our brains—and recent research suggests our bodies, as well—where it becomes the content of our consciousness. And it is that content that becomes the very essence of our thinking process—the “stuff” that what we call “thought” is made of.

Moreover, Messrs. JK and DB observed that the same seemingly never-ending process of inner chattering that creates ME (and YOU) also affects what we call “perception.” Although they may appear to us as separate, our ability to perceive “outwardly” (the world “out there”), as well as “inwardly” (the inner worlds of imagination and contemplation), that ability is in actuality a singular process that directly affects the content of our consciousness—and vice-versa. The content colors the way we perceive the world, and the way we perceive the world colors the content. It’s a simultaneously occurring two-way process that is taking place during each moment of our existence. And that two-way process causes us to perceive life, as Saint Paul put it, “…through a glass darkly.”

I repeat: The world we experience is “filtered” through our conditioning—or consciousness—i.e., our fears, our desires, our prejudices, our deep seated hurts, all of which create ME (Bill)… or YOU, (insert your name again). Bottom line: That ME (or YOU) is a thought-generated self-image through which we perceive the world. It’s like having our own personally created “Hall of Mirrors” and one can readily see how that can cause problems.

Here’s JK on the subject:

Simply put, what appears to be a division between “the observer” (ME) and “the observed” (MY greed, MY envy, MY jealousy) is an illusion. In actuality, I am all those things. The observer is the observed.

Let’s pause here for a moment…

I have been told that a true understanding of the meaning of the words in that last paragraph, is not unlike when serious participants in the Alcoholics Anonymous program get sober for the first time—meaning, “Now comes the hard part.”

For, Messrs. JK and DB’s explorations further exposed how all of these factors contribute to the futility of the way we presently deal with the problems of life, because we have also developed a capacity that allows our thought-generated self-image to filter our perceptions of the world, while at the same time denying that such a filtering process exists. And it is this pattern of self-deception that has repeated itself over and over again, in civilization after civilization, since mankind started passing on their experiences to those who came after them—orally and otherwise.

Here’s DB on the subject:

We are infusing our imagination, our past, our knowledge into what we see… …that isn’t necessarily bad, it may be very necessary in many contexts. However when we fail to see that this is happening, then we are in danger. Especially if there is resistance to seeing it, and we are conditioned to resist seeing that this is happening. That’s really when the self deception arises.

It is this deeply embedded process of self-deception that is the cause of the fragmentation that is breaking each of us, and therefore the world, up—pitting one fragment against the other in never-ending conflict. Furthermore, in more recent times, we’ve added to that ever-growing sense of futility by convincing ourselves that what we call the “the human predicament” is an unavoidable consequence of what we have labeled “human nature”; a nature that has now even developed the technological capacity to destroy humanity on a global level.

But JK and DB also articulated what may be the only possible way to break this pattern. And the first step toward doing so is to wake up to the reality of what was just described. For, if what they were suggesting in their dialogues is indeed the way things really are, so then is their perception of the  possibility of a total transformation of ourselves and of society—a transformation that must begin with each individual.

“The individual is obviously of the greatest significance in society because it is only the individual who is capable of creative activity, not the mass… …If you see this fact, then you will also realize that what you are in yourself is of the highest importance. Your capacity to think, to function with wholeness, with an integration in which there is no self-contradiction—this has an enormous significance.

“We see that if there is to be any real change in the world—and there must be a real change—then you and I as individuals will have to transform ourselves. Unless there is a radical change in each one of us, life becomes an endless imitation, ultimately leading to boredom, frustration, and hopelessness.” — J. Krishnamurti

One cannot overemphasize the foundational caveat in the options offered by these two very serious and dedicated world figures in their co-investigation of consciousness: Each of us must ultimately explore those options for and by ourselves, rather than taking anyone’s word that what was discovered by them is factual—including theirs… and mine.