A few months after J. Krishnamurti’s passing in early 1986, friends of David Bohm who lived in Ojai asked him if he would consider holding a weekend Seminar there, on the grounds of the Krishnamurti Oak Grove School. He agreed, and thus began a series of annual Seminars that would last until 1992 when Bohm himself passed. The Seminars were specifically limited to no more than 50 people, since Bohm felt that it was important for the attendees to ask questions and participate as much as they wished. However, on occasion, he would mention that—even with the imposed attendee limits, if each of them were allowed five minutes to speak—that too would become unmanageable. Therefore, during some years, two Seminars were held a month or so apart from each other to accommodate the greatest number of people who wished to attend. All were audio-recorded. 1991 was the only year a Seminar was not held, because of Bohm’s serious illness.

The Seminars have been erroneously reported as being about so-called Bohm Dialogue. However, although Bohm Dialogue was discussed throughout the course of the Seminars and even attempted one year, the fundamental subject of all of them was about Thought and the nature of Consciousness. And in fact, as Bohm would explain, over and over again, so-called Bohm Dialogue requires a thorough understanding of and insight into Thought and the Thinking Process in order for it to be properly implemented. Herein lies the major fault that can be found in most Bohm dialogue groups. Not long before he passed, Bohm said to an associate:

If I had known what the Bohm dialogue process would become I would stop it all. It may be too late. There is a serious misunderstanding of dialogue in my name.—David Bohm, 1991

However, there is indeed a concept that Bohm developed during the Seminars that is, in our opinion, of historic significance. And it is this concept that was the true creative outcome of all the Seminars. For what Bohm scientifically identified and carefully developed throughout the Seminars as “Proprioception of Thought” is identical to what Krishnamurti called “Meditation.” And in the final session of the 1992 Seminar, Bohm would prove that it was possible to enter into the “Proprioception of Thought” mode by announcing that he was in it; and then link the two actions by describing what he and Krishnamurti had been experiencing in their Dialogues since the earliest ones in 1965.

One of the Seminars that was held in 1989 was actually privately published (and edited by Bohm) under the title Proprioception of Thought. 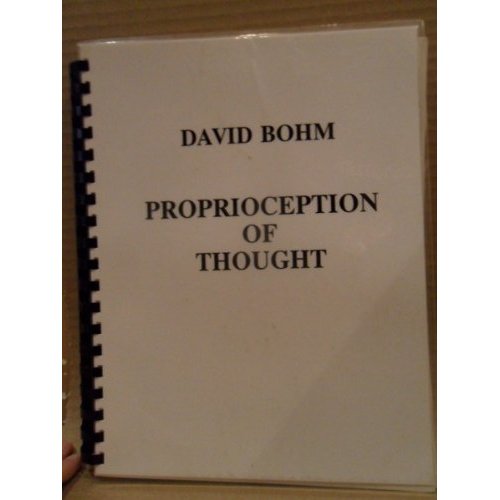 We are able to present the entire weekend Seminar at this time. To show how the concept continued to be developed, we are following these audios with a video of the first session of the 1990 Seminar which was the only one videotaped. It was also posthumously published in book form under the title Thought as a System. We will be posting the rest of the videos along the way.

The Seminars usually started with an overview session on Friday night. It would be followed by sessions on Saturday and Sunday. This is the 1990 Friday night session:

The 1990 Saturday afternoon session, Part One: